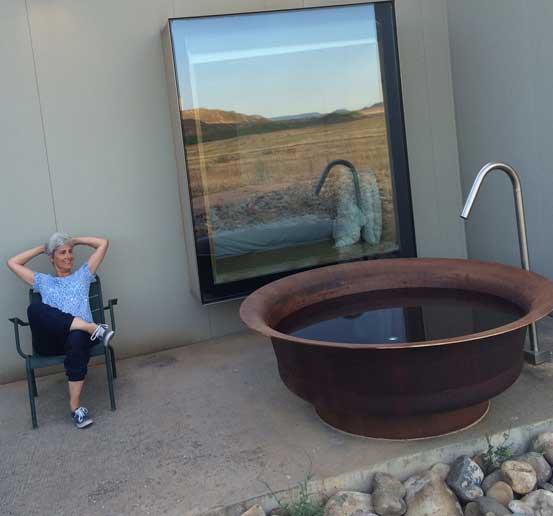 A chance encounter between the Royal portrait painter John Hughes-Hallett and the painter Sally Trueman began a friendship that was to span two decades. Greatly influenced by her mentor, Sally's early work focused on portraiture. (Sally Trueman holds the copyright for all John Hughes-Hallett's paintings, except those residing in Her Majesty the Queen and His Royal Highness Prince Charles, Prince of Wales Art Collection.)

Sally moved to France in 2000 and was commissioned to do a series of eight large canvases depicting the landscape and colour of the region, these paintings now hang in a private museum in New York and the Museum of Carcassonne. Whilst living in the South of France she painted such sports personalities as Zinedine Zidane and Sabastien Deleigne.

France had a profound influence on her working style and her palette. Her paintings have a deep luminosity, and the texture of the paint has an almost sculptured feeling. Her paintings are built up in layers and at first glance the marks on the canvas seem to be spontaneous, expressive and impulsive. In fact the building up and stripping back of these layers of paint have taken an extraordinary length of time and great perseverance. The result is the painting takes on a sculptured look which gives the onlooker the impression of a fleeting transitory moment captured from the artist's vision and laid effortlessly on canvas. Heavily worked brush strokes dominate her canvas, like a calligraphic mark. They are all inherent markings, in the same way that punctuation is inherent to a written page. It can be so delicate that it is hardly visible, veiled under layers of paint and washes, or it can be pulsing in the foreground.

Sally's work makes up part of the Museum Carcassonne, Brighton Museum collections and the National Portrait Gallery. She has had her paintings published in several magazines and books including, International Artists, Pastel Artist, Artists and Illustrator, Practique des Arts and The Neurobiology of Painting by F. Clifford Rose.

Sally Trueman also worked under the pseudonym of Heinrich Stoltz painting animal studies in pastel. Many of these pastels were sold through the auction houses such as Bonham's and Christie's in London between the years 1978 and 2006.

"Whatever reorganisation the subject undergoes in the process of my painting, something of the colours and forms that I initially saw will appear as permanent residues on my canvas."..... Sally Trueman